January 8, 2019 By Sandra Walston Comments are Off

“Antwone Fisher” (starring Derek Luke) is a compelling movie starring Denzel Washington (his directorial debut and role as a naval therapist). It is a heartfelt true story about a young man’s disheartening childhood until in his early twenties he joins the Navy. While extra tissues are required during the movie, what fascinated me was this: when I walked out of the theater, I heard a woman say, “What a story of survival!” I left the movie saying, “What a profound story of everyday courage!”

Whether you saw the movie or not it does not matter (nor does it matter that the lead character was male). What is important is the perspective you hold about your life. Do you perceive the steps in your life as courageous or is your life lived strictly around surviving? The first two stanzas from the poem “Courageous Woman, I Am!” reveals how a woman (or any individual) discounts their courage:

The slight of a gaze

The shrug of the shoulder

The blush of unease

The stare of not seen.

To discount each praise.

My actions are poised,

I hint to my boss

As my principles are lost.

What is the difference between courage and survival? The origin of the word courage (corage) is medieval old French, meaning “heart and spirit.” This definition (as compared to facing fear or taking risks) means finding and experiencing your true self and “being” true to your spirit. Antwone may have experienced many types of abuse during his childhood, but he always knew he was more than his life’s experiences: “His mind was bigger than his problems.” He sensed his true core and he was determined (one of the twelve behaviors of courage found on the “Source Wheel”).

By contrast, the words associated with “survival” are endurance, maintenance, subsistence, and going on through thick and thin—staying alive.

Do you have a “story” you tell about your childhood?

Okay, I have the courage to be vulnerable and admit that I came from a “dysfunctional family;” however, my life is not about that “false self-story.” * Antwone was unwilling to remain stuck in his story. While he had immersed anger about his life, he knew he was a good person and that he deserved to be happy. The Naval therapist helped him confront and eliminate his past and claim his true essence. To me, he was preparing to receive the therapist’s guidance (even though he resisted the beginning sessions). He was a genuine (meaning authentic) example of courage just waiting to be claimed (just like Dorothy in “The Wizard of Oz”).

There are stories of survival, such as swimming in the ocean, being pulled out to sea, losing the horizon, and praying someone will find you before you drown. But those are the extreme stories of physical courage, not everyday stories of courage such as speaking truth to power. One Courage e-zine subscriber wrote, “I think the movie was about both (survival and courage). As a child, it was survival. As an adult, he found his foster family and birth mother and told them he remembered everything. At that stage, his actions revealed courage because he didn’t have to retrace his steps and confront his past; although, it was imperative if he wanted to become a better adjusted person.”

*False self: the self-image developed to cope with the emotional trauma of early childhood, which seeks happiness in satisfying the instinctual needs of survival/security, affection/esteem, and power/control, and which bases its self-worth on cultural or group identification. Thomas Keating, Open Mind Open Heart 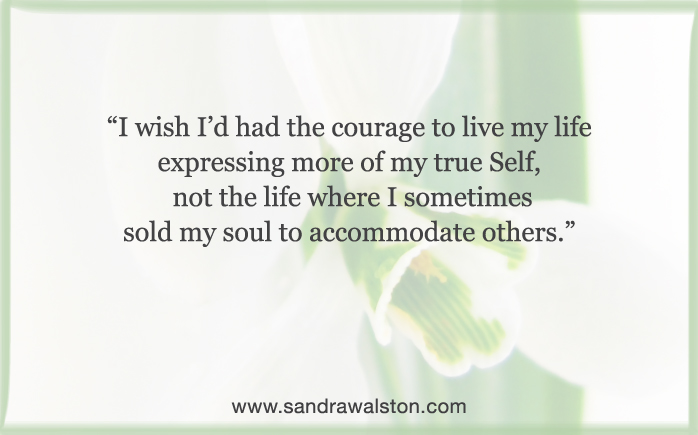