HomeCourage Blog Moms Share Their Stories of Courage with Their Children

Moms Share Their Stories of Courage with Their Children

August 5, 2018 By Sandra Walston Comments are Off

Moms, how would you answer this question?

When moms share their stories of courage with their children it provides an opportunity to celebrate those anecdotes. With this intention, then, and only then, will courage become a virtue ingrained in their children’s psyche. This starts early in childhood.

Many women forget to share their stories of courage with their children. Angela Cortez had an eye-opening experience when she shared with her sixteen-year-old daughter that she had lived on food stamps and sacrificed to achieve her career as a newspaper journalist. Prior to that discussion, Angela felt her daughter really did not understand the depth of their poverty because the child had been too young to remember. Angela came to realize it was an important part of her life that she should share with her daughter, especially at a time when the teen was becoming very materialistic. Her daughter enjoyed a very nice life and was unaware of the significant sacrifices that had helped provide her comfortable lifestyle. Angela’s story demonstrated courage in a difficult time and it provided her daughter with an example of claiming the power to dig herself out of a hole; her story also revealed the courage to engage in an intimate conversation.

The best tactic is to start using the word! You will struggle with this task if you do not give yourself permission to be courageous. Eventually, mere exposure will raise your courage consciousness, and you will find the outcome transforming and renewing (and so will your children). 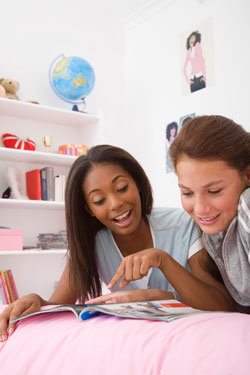 “Keep your fears to yourself; share your courage with others.” — Robert Louis Stevenson