HomeCourage Blog Katherine Graham: Courage to Roll Up Your Sleeves

Katherine Graham: Courage to Roll Up Your Sleeves

January 12, 2018 By Sandra Walston Comments are Off

Excerpt from The Courage Difference at Work: A Unique Success Guide for Women

Katherine Meyer grew up in a privileged family and graduated in 1938 from the University of Chicago. Her father had urged her to launch her career in journalism by working for the paper he had purchased five years earlier, The Washington Post. Young women of this time rarely contradicted their parents’ political viewpoints. Unlike her staunchly conservative parents, Katherine sought diversity and intellectual openness; so instead of accepting her father’s job offer, “she moved to San Francisco to work on the News as a reporter for twenty-five dollars a week. Seven months later, despite her ambivalent feelings toward her parents, she agreed to her father’s offer of a four-dollar-a-week raise to come home to work for the Post.”[i]

Perhaps Katherine’s exposure to the lives of other courageous women informed her opinions. She knew of the hardships and social injustices that Victoria Woodhull endured as a suffragette (and as the first woman to run for President of the United States) declaring, “I would love to have known Victoria Woodhull… Everyone interested in the history of women’s rights will be fascinated by the story of this little-known pioneer.”[ii] Katherine’s recognition and admiration of Victoria Woodhull’s courage affirmed her own courageous spirit, and her willingness to contradict her parents’ views established her courageous spirit at an early age.

Katherine’s sincere reflection regarding the decision to move back produced one of many defining moments that characterized her core identity and confirmed her courageous principles. Even in tough situations, Katherine delved into her true Self to establish her standards. Reflective self-analysis produces personal progress.

Katherine married Philip Graham in 1940, and the couple purchased her father’s publishing business in 1948. Stepping to the sidelines, Katherine retired to become a wife, mother and congenial hostess for her husband, now the CEO of the Post. Life was good, but in 1963, everything changed with a single gunshot. Katherine heard the gunshot and found her husband’s lifeless body. Brilliant but bipolar, Philip Graham had committed suicide.

Philip’s suicide negated the couple’s well-laid plans and required Katherine’s immediate response. She concealed her stunned anguish, rolled up her sleeves and took the helm of the Post, which was considered just a regional paper. While the man’s world in which she found herself perpetuated the myth that a woman’s place was in the home, Katherine had shown that she was an independent thinker. “At first patronized and intimidated by her male employees, as well as painfully shy … Graham slowly gained self-confidence and executive authority. Her goal was to remake the Post into a respected, world-class newspaper.”[iii]

Katherine had a good sense of who she was, which kept her grounded in her decisions and enabled her to establish higher standards even in the face of her mistakes. “A mistake, she said, is simply another way of doing things.”[iv] No matter how intimidating or potentially damaging the outcome, Katherine was determined to maintain her standards and get the job done. We all encounter ample opportunities to test our courage, but the obstacle of self-doubt can keep us trapped for a lifetime if we fail to respond to these opportunities in courage. Katherine kept asking questions until she was able to assess the situation, apply the necessary courage and establish higher standards.

In 1971, a defining moment presented itself to Katherine in the form of the Pentagon Papers, the documents that revealed the government’s deception about the war in Vietnam. With the Post preparing for a public stock offering, the timing could not have been worse. Katherine courageously chose to follow her heart. Dismissing scripts of self-doubt, she stepped up the leadership ladder to the challenge and maintained her standards.

Hard decisions live in the questions, not the answers. Questions inspire action. Actions reveal convictions. Standing in courage, Katherine chose to establish higher standards by making her expectations clear and then taking action that flowed naturally from her centered identity. Katherine’s understated manners and gracious style were not signs of inner weakness but of an intense inner light. Embodying humility, Katherine held fast to her core values and maintained high standards at the Post.

Katherine and her team at the Post stood behind the decision to publish the Pentagon Papers, even while the Nixon administration made threats and the company’s stock dropped. Revealing the values in which she believed most strongly, Katherine displayed a courageous combination of integrity and high standards. The merit of Katherine’s resolute spiritual courage was reflected in her refusal to play it safe, dodge discomfort or hedge her bets. Holding herself accountable for her decisions, she endured the temporary discomfort of outside pressures and the potential for failure. When was the last time you failed? Did you use that failure as a gain?

Nixon’s resignation in 1974 vindicated Katherine and the Post. By establishing higher standards that included truth in journalism, Katherine profoundly elevated the Post’s stature. With no female role model, Katherine was the epitome of “where courage meets grace.”

Katherine made tough decisions based on the standards she had established when self-doubt could have easily undermined her integrity. When you face tough decisions, does self-doubt erode your integrity, or have you established personal standards that allow you to manifest your courage under pressure? Establishing higher standards at work includes behaviors like summoning the courage to tell your boss what you are worth. In other words, to request what you deserve requires unruffled courage. When offered a new job, are you able to equate your worth with the top salary tier? Do you step away from situations that do not cultivate your courage?

Most people do not push past certain boundaries, particularly the artificial boundaries of corrupt or unethical workplace standards. Reflecting an absence of courage consciousness, such standards drag us down and create inroads for self-doubt. How do you learn to move beyond artificial boundaries? Do you emulate someone who exemplifies courage, a “courage change agent”? Have you claimed the courage to align your personality with your spirit?

Katherine Graham became a courage change agent and a legendary CEO, probably the most courageous CEO of our time. (In 2000, she was one of only three women who ran Fortune 500 companies.) Comfortable with her identity as a woman, Katherine balanced the feminine behaviors of courage with high standards. Businesses fall apart when the courage of their leaders lapses, and the remains of these businesses clutter the corporate landscape.

Katherine admits throughout her Pulitzer Prize winning autobiography, Personal History, that she experienced self-doubt about her decision to run the Watergate story. The fact that she overcame her doubts but is willing to admit them demonstrates that she understood the value of humility. “Humility is the basis of an honest, mature self-awareness that accepts ourselves as we are, without covering up, making excuses, or blaming others… When we have humility and simplicity, we are free of hypocrisy.”[v]

At the age of 84, Katherine died from a fall. Honoring her memory, the editor of Vogue wrote, “She saw no reason to slow down with age and always remained true to her principles and enthusiasms.”[vi] There are many courage styles and no single “better” way—only the action required to establish your higher standards.

Whether you are a first-time manager, CEO or entrepreneur, building your career on the sands of self-doubt will produce a shaky, disaster-prone work life. Have you established the personal standards needed to promote your talents and overcome self-doubt? One easy way to emulate Katherine’s gracious style of courage, the source of her high standards, is to offer frequent words of encouragement. Encouragement is oxygen to the heart and goes a long way toward elevating the standards of your colleagues at work.

Some might say that self-esteem is the underpinning of courage. Certainly, one could make the case that, if you are prone to speak your mind, display your convictions, stop abuse on the spot and so on, you probably are a confident person. For example, while visiting President Johnson’s Texas ranch in 1964,

Washington Post publisher Katherine Graham grew outraged at angry criticism the president directed at the first lady in her presence, and she reminded Johnson that Lady B “got you where you are today.”… That episode … indicated that Graham, who had been verbally and physically abused by her husband, Phillip Graham, had by that time found new courage with men and a new sense of entitlement to stand up for herself and other women in similar circumstances… She also encountered sex discrimination in the industry organizations to which she belonged and was often the only woman at their gatherings … a brilliant, strong-willed woman … who defied the diminished expectations for women of her time and proved to be a courageous, values-driven leader and hard-nosed businesswoman.[vii]

I confess that with over 20 years of original feminine courage research that yielded two books, most of the women I meet possess unidentified courage. 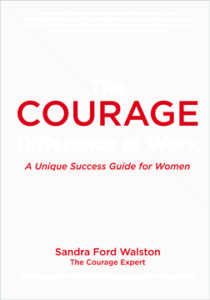 [ii] Lois Beachy Underhill, The Woman Who Ran for President: The Many Lives of Victoria Woodhull (New York: Penguin Books, 1995), first page for “Praise for.”