November 15, 2016 By Sandra Walston Comments are Off

Courage is not simply one of the virtues, but the form of every virtue at the testing point. — C. S. Lewis

(Currently playing in theaters is a movie called “Denial.” Based on a true story, at the end of the movie there is a bronze statue of Queen Boudicca—here’s her brief story—an excerpt from The Courage Difference at Work: A Unique Success Guide for Women.)

History has frequently glorified the wrong people. Using intimidation as a way to control perceptions, social, political and religious powerbrokers perpetuate the stories that serve their agendas.

A Celtic warrior queen named Boudicca has suffered the neglect of the history (written by her Roman persecutors), but her life exemplified deep-rooted courage in the face of extreme obstacles, especially intimidation. “As she stood in her war chariot facing the Roman army of Gaius Suetonius Paulinus … she had her two young teenage daughters by her side. ‘This is the first time Britons have been led to battle by a woman.’… Boudicca, the ‘Victorious,’ went on her way to meet her fate and take her place in the history books.”[1] But many times, historians (in this case, the Romans) doubted or discounted a woman’s contribution, thereby delegating her actions to the realm of folktale and mythology. For centuries, women’s stories and what it means to be a woman have been lost or misrepresented through intimidation.

The Romans invaded southern England in 43 AD when Boudicca’s husband was king. When he died around 60 AD, Boudicca discovered that her husband had betrayed her, leaving half his kingdom to their two daughters and the other half to Rome. Boudicca feared that her people would lose not only their land but also their language and traditions under Roman rule.[2] “The Iceni kingdom was ravaged and looted. When she protested, Boudicca was stripped and whipped in public while her young teenage daughters, Epona and Drieda, were raped in front of her.”[3] History is unclear about how the destitute Boudicca was able to pull the other tribes and small kingdoms together for an uprising, but she did just that. Her goal was clear: to free Britain from Roman plundering, taxes and slavery. Instead of bowing to intimidation, she exercised her courage to

Take on the tough project.

Boudicca’s name came to mean “Woman of the Sword,’… for she raised an army of 230,000 British men and women to defy the mighty power of Rome.”[4] Eventually, the Roman army crushed Boudicca’s rebellion, and her story of feminine courage was buried for centuries. Much later, in the late 1800s, Queen Victoria enjoyed traveling the countryside and reflecting on the glories of Britain’s past. Graham Webster writes, “On her exciting tour of northern Scotland in 1872, she found many roads decked with triumphal arches bearing messages in Gaelic… ‘To Victoria, our gratitude.’… The name of the famous queen of the Iceni was actually Boudicca, which meant precisely ‘Victoria.’… The name is the only link between these two great women, both enshrined in British history but separated by almost two millennia.”[5]

On the Thames River, opposite of Big Ben, is a massive bronze statue erected in 1902 with Queen Boudicca standing on a chariot being pulled by roaring horses. The statue honors how she led one of the bloodiest English revolts with unrelenting courage. 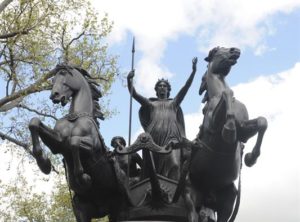