Here are some highlights:

“Courage will never become an app.”

That’s one of many pithy nuggets of wisdom that more than 100 Agrium employees in Calgary, Alberta were treated to earlier this month, courtesy of The Courage Expert, Sandra Ford Walston.

The Agrium Women’s Leadership Group (AWLG) hosted the 90-minute presentation called Courageous Leadership. In her paradigm-torpedoing talk, Sandra provided a range of insights on courage, based on her 16 years of research on the subject. She’s the author of numerous articles in high-profile management periodicals, plus three books – Courage: The Heart and Spirit of Every Woman, STUCK 12 Steps Up the Leadership Ladder and Face It! 12 Obstacles That Hold You Back On the Job.

Early in the presentation, she asked the audience to name some virtues. Integrity and honesty topped the list, which she said is typical. Courage was not mentioned – which, sadly, is also typical.

“Aristotle said that courage is the first of the virtues, making all of the others possible,” she noted. “But how many of you naturally, growing up, heard the word ‘courage’?” Sandra asked the mostly female audience. No hands went up. “Only one time in my 16 years has somebody raised their hand when I asked that question, and I said, ‘Liar liar pants on fire,’ because it was so hard to believe and so rare.”

Sandra said courage is a much-neglected virtue – particularly at work, and particularly among women. “My research shows that only 11 percent of women perceive themselves as being courageous. That led to my first book. I need a little help here. I need you to start recognizing this critical virtue and claim it,” she said.

While North Americans tend to favour physical courage – rescuing a stranger from a burning building or tackling a purse snatcher – Sandra emphasized the importance of the faceets of courage such as moral courage, emotional courage, individual courage, spiritual courage and leadership courage.

Courageous leadership means knowing that you have all the answers you need in order to take action. Don’t be deterred by the fact that you only know 40 percent of what you think you need to know, to take the lead on a tough project at work, she said.

Courageous leadership also means choosing to pitch an idea that just might be creative – or not. “When I’m going to say something that’s a little bit out there, I say, ‘You know, this takes courage for me to say this: blah blah blah.’ When I do that, a different kind of listening happens.”

Confession is a cousin of courage, she said later in the presentation. “I choose to have the courage to say, ‘I have to confess to you that I don’t know anything about that.’ And that confession keeps our spirit and our integrity clean.”

Wrong Rung of the Ladder
For too many of us, our courage is caged at the workplace – and as a result, we’re stuck. Stuck too long in a job that we’ve outgrown, or worse: a job that wasn’t right for us in the first place.

“What do we do to keep stepping up the ladder? We all get stuck. The issue is, do you know when you’re stuck?” she said. “I always think about the ancient Chinese proverb that says, ‘He who hesitates before each step spends his life on one leg.’ In courage, it’s about taking action.”

Not that courage is an excuse to make foolish decisions, she noted. Nor does courage in the workplace always look the same for every woman.

“One size of courage does not fit all. We’re all on different steps of the ladder, and on different levels of courage consciousness. But what can you do to keep stepping up? It’s about recognizing the 12 behaviours of courage found on the Source Wheel diagram such as strength and determination. Are you willing to give yourself permission to claim your courage?”

She closed her presentation with a clever quip that emphasizes the importance of knowing who you are – and who you want to be.

“Lily Tomlin, who is one of my favorite comedians said, ‘All my life I always wanted to be somebody. But, I realize now that I should have been more specific.’ With courage, you can be more specific! Thank you!”
No, Sandra. Thank you!

About the AWLG
The Agrium Women’s Leadership Group embraces a broad, inclusive vision to “Recognize, Develop and Enable Women’s Potential at Agrium”. The AWLG is open to any employee of the company and not only provides programs, mentoring and networking opportunities for women, it also helps participants define career paths, as well as encouraging flexible and creative solutions to business challenges. There are four chapters: Colorado, Calgary/Carseland, Calgary Administrative Professionals and a Virtual Chapter. 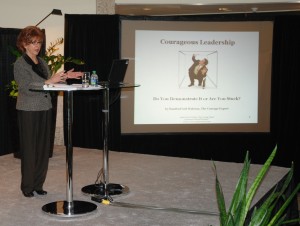